Home > Outdoor Activities > Build a Volcano in Your Garden

Build a Volcano in Your Garden 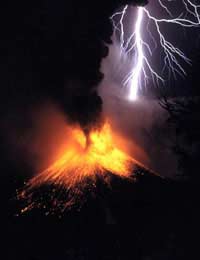 Children of all ages are fascinated by science, especially when they can be actively involved in some type of experiment or activity themselves. So what could be more fun than building a volcano in your garden this summer?

Your first reaction might be that catching butterflies or starting a wormery would be easier. Wrong. Building a volcano only takes about 20 minutes of preparation time, and it’s something your kids will remember for years to come.

So let’s get building!

What is a Volcano?

Before you begin, it’s important that you explain to your children what a volcano actually is before you start building one. Here is a concise explanation – so you won’t get it wrong…

A volcano is a rupture or opening in the surface of the earth, which is also known as the crust. When the rupture occurs, a combination of hot magma, gases and ash escape, causing what we call an eruption.

In easier terms, a volcano is a mountain that opens downwards, instead of upwards, over pools of molten rock. When pressure forms underneath, the volcano erupts, causing lava and gases to spill over the mountain’s opening.

Currently there are more than 500 active volcanoes in the world today. Interestingly volcanoes that lie dormant for hundreds of years can sometimes erupt, seemingly with little warning. Visit your local library with your kids for more research, and encourage them to draw pictures or write a report about volcanoes to take back to school with them.

To start to build your own garden volcano, there are a few necessary basic household items you’ll need to assemble. They include:

Now that you’ve assembled everything together, follow these easy steps:

Here are some top tips to help you make the most of your volcano:

Experimentation is an important part of growing up. The vast majority of children will learn a lot more from trying a science experiment with their own hands, than they would from reading about it in a book.

Building a volcano in your back garden is not only fun but also educational. Just don’t let the kids know they’re learning something – after all, it is summer!

Pick Your Own Fruit

Make the Most of an Amusement Park